Today I would like you to join me on a fascinating journey in a country that is 3525 KM away from The Netherlands and 4000 years ago from our modern times, the beautiful country of Egypt! I have started my solo trip on the 23rd of February at the Eilat – Taba crossing border.

It was my first time visiting a country that was so close to my home country where I have grown up, yet culturally so different.

Mentally speaking, I was a bit scared but excited about it at the same time.

I started in Cairo, the capital city of Egypt, with over 20 million inhabitants and over 4000 years of history. During those 4000 years we split from a large family as descendants of Abraham, Isaac and Jacob to the Jewish nation we are today.

So I took myself back in time and imagined what our life was like thousands of years ago.

First I went to see the pyramids.

Whether we built it ourselves or not, as slaves or as workers, it was inspiring to discover the creativity and limitless possibilities of our species, humans, even thousands of years ago, without the tools and technology we have today.

Then, I was curious about the historical Nile river, the one I have heard so many stories about. When standing in front of it I had to ignore all the skyscrapers…

In my mind, I went over Pharaoh’s stories in which he took his morning baths in the river when the water level went up just for him as being the king of the Egyptian empire. Then I thought of Yocheved, Moses’ mother who left him to hide in the river until Bathia found him.

My skin tingled as I imagined the Egyptian soldiers throwing hundreds of newborns babies into the giant river, just because they were born male. Moreover, it was terrifying and unbelievable to imagine the whole river turning to blood when the first plague (out of ten) came upon Egypt.

When I went to the city of Alexandria, I remembered the wonder of the golden doors of Nicanor, which were to be used as the doors of one of the gates in the Mikdash. During a journey, the heavy door had to be thrown into the water because their boat nearly sank. When Nicanor arrived at the port of Jaffa, he discovered that the lost door had floated all the way from Alexandria to Jaffa.

When passing through the sunny streets of the city I discovered an ancient Jewish synagogue named after Eliyahu Hanavi, first founded in the year 1354, later destroyed by Napoleon in the early 18th century and rebuilt again in 1848.

My next and last stop for this trip in Egypt was Sinai. Since I was a kid I was curious about that place where we have officially become a nation. In my mind, I have pictured the crossing of the Red Sea, the miracles, the gathering in front of the Sinai mountain to receive the ten commandments and the 40 years journey in the desert around me. It all became vivid to me.

Unfortunately, I did not reach Mount Sinai itself as I would have liked, but through this journey, I learned so much about our history as a nation.

I was fascinated by our similarities, by how we all pray and preach to the same god, but in our own unique and traditional way. Both nations keep similar prophecies, but our interpretation is completely different, but does that mean only one is righteous? What if God is for everyone and religions are like channels for all to reach the exact same destination.

During this journey, I have met so many unique and different people. Some felt like family, others were hesitating, but all of them have a human beating heart, a spirit and a soul.

Just as we all do.

One day, I know I will travel back to Egypt, for experiencing more of its breathtaking nature, ancient history and rich culture. 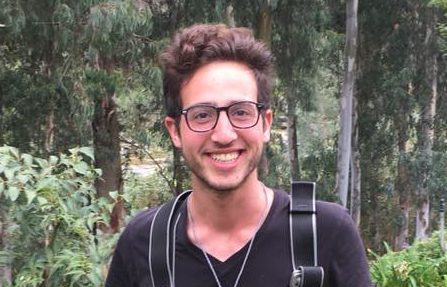 Nissim Khalifa was born in Bnei Brak, but later grew up in Jerusalem. He aspires to become a successful film director and enjoys sharing his dreams and passion with the Chabad On Campus community.