Emily in the Spotlight – Identity, Outside of the Jewish Bubble, and Challenges for European Jewry #26 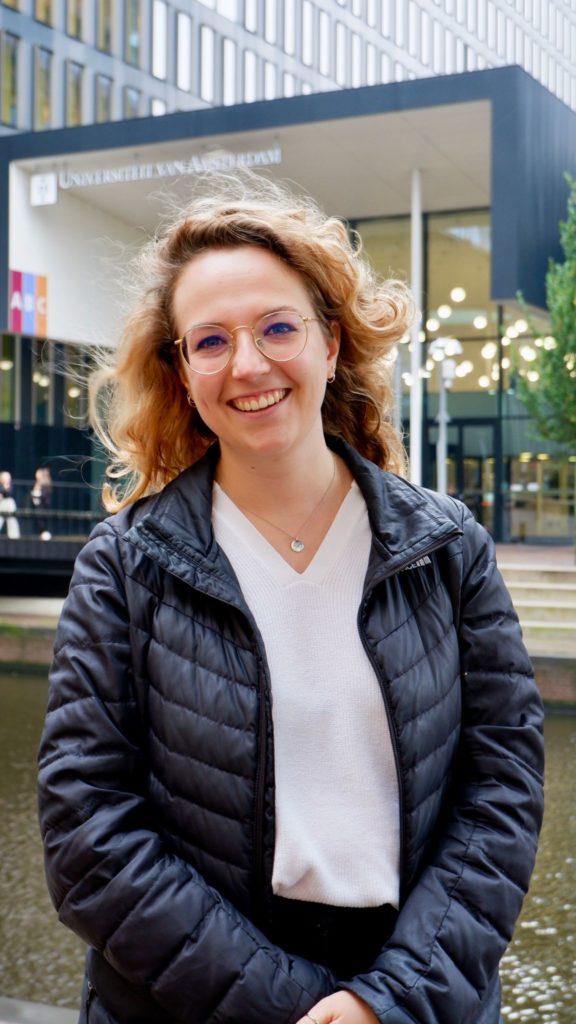 Emily Miriam Bowman (22), was born in the United States but predominantly grew up in Hungary. After high school, she did a gap year in Israel with MASA for nine months. She just finished her bachelor’s degree in Politics, Psychology, Law and Economics (PPLE) in Amsterdam. Her next adventure starts in September and takes place at the European Union of Jewish Students (EUJS) in Brussels.

You were born in The States, then you moved to Hungary. How was your life when you were younger, how was it to grow up in Hungary?

So, my dad’s American and my mom’s Hungarian. My mom grew up under communism in Hungary, where they never spoke about religion in the house. So for her, her relationship with religion was always different from my dad’s, who grew up in America in quite a religious household. When my parents had kids, they had to decide on the role of religion in our upbringing, of course, and they had to decide if they wanted to enrol us in Jewish education (day-care and school, for example). As you can imagine, my mom wasn’t used to it, but my dad was a big proponent.

In the end, I grew up in a bubble in Hungary, and to a certain extent, my life in Hungary is still in a bubble. I attended Jewish day-care, school, youth group, summer camp, and of course synagogue. At the moment, most of, if not all, of my friends in Hungary are still from these environments.

Despite all the news that we hear about Hungary, in my opinion, you can have a very nice Jewish life there. Yes, there’s antisemitism, like there’s antisemitism everywhere in Europe. However, we have everything for someone to live a Jewish life in Hungary, but more specifically in Budapest actually. This is more difficult outside of the capital. There are, in Budapest for instance, Jewish stores, many synagogues of all denominations and there’s a mikvah.

You’ve spent many years in Hungary. Do you also feel Hungarian, or how would you describe your identity?

Identity has always been an interesting question for me as a dual citizen. I feel heavily European, but I don’t know if I’d say that I feel specifically Hungarian. However, my European identity obviously stems from the fact that I grew up in Hungary. The fact that I don’t just feel Hungarian, or Eastern European, but European as a whole is because I also have the Western influence from my dad and also because we travelled a lot with my family.

Although Hungary is a difficult place, under the right circumstances, whatever those circumstances may be, I wouldn’t mind living in Budapest later in my life. I truly love Budapest and had an amazing time there.

Why did you decide to study PPLE in Amsterdam?

I initially applied to the United Kingdom, and Glasgow specifically. But unfortunately, I wasn’t admitted, as one of my grades fell just short. However, I was planning on taking a gap year in Israel anyway, and during that year I had to decide on my studies. As I didn’t want to redo one of my high school exams, I chose PPLE in Amsterdam: A very good program that gains more and more recognition, also due to the fact that the Dutch princess Amalia starts as a first-year student in the upcoming academic year.

Do you like Amsterdam and what role does the Jewish community play in our student life?

Amsterdam is a great city! It’s super small, not like Tel Aviv, but still. Obviously, my time in Amsterdam was split in half due to COVID, but I love the international environment and the Jewish life that it has to offer. I attended many Shabbat dinners at Chabad on Campus in Amsterdam and those were very nice. I enjoyed visiting their Chabad house, mainly due to the international environment and the fact that many young people attended, and not just old people (not that there’s anything wrong with old people!) But, it’s nice to sit around a table with like-minded individuals who are going through similar life situations. Rabbi Yanki and Esty were always very welcoming!

One day, my sister notified me of the fact that studying in Amsterdam made me leave my Jewish bubble for the first time. I grew up in the United States and Hungary within a bubble, and I spent a year in Israel, which is, of course, also quite a Jewish bubble. My life in Amsterdam was the first time that I wasn’t surrounded by Jews all the time.

“My life in Amsterdam was the first time that I wasn’t surrounded by Jews all the time.“

How was that, this change of scenery from a Jewish bubble to a non-Jewish one?

It’s interesting, but I’m very vocal and proud to be Jewish. I also defend Israel a lot, but not at all costs, obviously, as no country is perfect. Although my friends are very used to me being Jews, and I’m seen as an example of what a Jewish person is, as I am their introduction to Jews, I don’t feel the responsibility of being a token Jew or that I have to represent Jews. However, it’s good when they have a nice experience, that they’ll think that I’m just another person, but just happen to be Jewish.

Inevitably, there will be things that they’ll have some difficulties understanding. However, during Hanukkah, I would light the candles and they’d ask questions because they were interested. But still, I don’t feel like I represent the people, or Israel, or anything at all. In my opinion, that’s a common thing amongst antisemites, to basically hold individual Jews responsible for Jews as a whole.

My Jewishness does come up in a lot of conversations, though. Mostly because I’m very open about it, and I’ve never felt that I couldn’t share it in a group, mostly because I surround myself with people that I trust and who are open-minded.

Being in an international environment, however, does come with certain challenges. I have an Egyptian coursemate, for instance, with whom I’ve had not-so-nice conversations on Instagram. For example when he posted “let’s make Israel ‘was-rael’”, so destroying the country. But I didn’t have too many negative experiences, so that’s nice.

You’re going to work for the EUJS in September, why did you apply for this position?

Actually, my job from September will be a shared position between EUJS and B’nai Brith International. I’ll be their Policy Officer and EU Affairs Officer, respectively. I was first introduced to EUJS in March when I attended their EU activism seminar in Brussels. And because my study programme revolves around politics, law, and other things, their organisation was, obviously, very interesting to me. Moreover, I always wanted a job that incorporated politics, Judaism and Jewish advocacy. So, when this job came around, I immediately got in touch with them and I got the position!

I’ll also be working and participating in Summer U, which is the EUJS’s flagship program. And, I’m supposed to go to the United Nations Human Rights Council in Geneva in July with the EUJS. So, I’m very excited for the upcoming months!

What do you perceive as the main challenges for European Jews, and what is the EUJS’s role in tackling these challenges?

According to statistics, antisemitism is on the rise, and therefore it could be seen as the most pressing issue. However, this issue is not uniform, as each country is different. In Hungary, for instance, we don’t have a very active BDS campaign, but in The Netherlands, we do have a very active one. So it’s very different from what countries, and students in these countries, are facing.

Also, we have to communicate with the local Jews, like the Jewish student and youth unions. Some of these unions are very active, like the German and Italian unions. Eastern European countries, however, don’t really have unions. And that’s when the EUJS can support them in fostering a Jewish life for the students within these countries.

Moreover, the European Union recently published their first and only strategy to combat antisemitism within all member states between 2021 and 2030. The EUJS tries to promote, for example, the appointment of national coordinators to combat antisemitism, like in The Netherlands. The adaptation of the International Holocaust Remembrance Alliance’s definition of antisemitism is also something the EUJS promotes. Lastly, the EUJS tries to ensure the fact that Jews can live as Jews within the European Union, for instance by securing the right to Shechita and Brit Milah.

Do you want to learn more about the members of the Chabad on Campus community? Check out our other Spotlights!