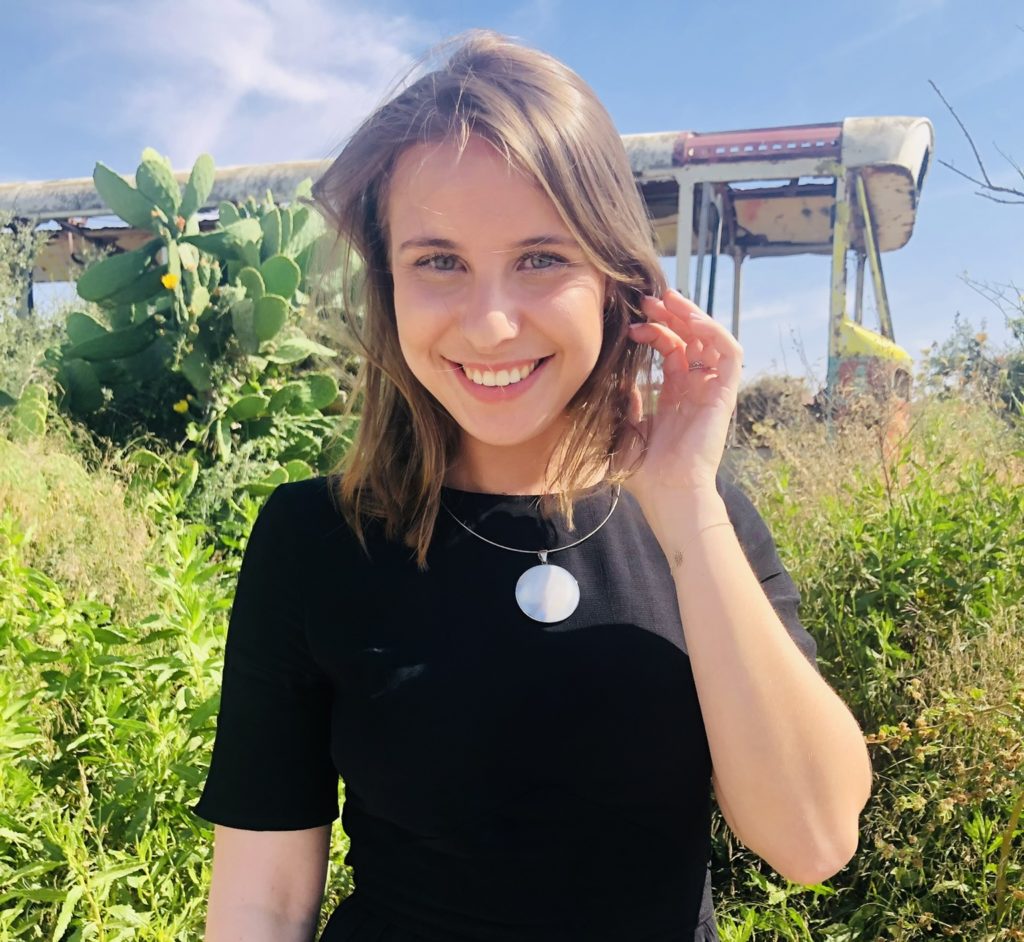 I was born in the U.S. but I do not have vivid memories of our time there. We moved to the Netherlands when I was about six years old. My mom is Dutch and my dad Israeli, so the decision to move to the Netherlands and not Israel was based on work opportunities for my parents. I grew up in the area where my mom was born, de Bollenstreek. It’s the area of the famous Dutch tulip fields. However, I also very much consider Israel my homeland since I have family in both countries. I never choose one ‘homeland’ I consider myself lucky to have two homelands. Growing up close to my Dutch family and visiting my Israeli family at least twice a year shaped me to consider myself pretty much 50/50 Dutch and Israeli.

I remember from my childhood that it was quiet, peaceful, growing up outside of the city was fun. We used to play outside a lot. Even though I grew up in the Netherlands, our Israeli identity was always present in the house. Where my friends would use to bring the usual ‘broodje met kaas’ to school, my dad would pack our lunches with pita and hummus. So even my childhood memories are always connected to both lands.

As a family, we do not practice Judaism in a religious way, I would say that we are more cultural Jews. We eat dinner together Friday evenings, we do every religious holiday. We have a mezuza hanging and keep kosher in our household.

Especially growing up in a non-Jewish environment (I am convinced we are the only Jews in Lisse), preserving our identity was key. We kept kosher not because of a belief in a G’d, but because we are Jewish, that is our identity and we will not change who we are just because we do not live in a Jewish environment. For example, during Pesach if we stay in the Netherlands to celebrate, the house is clean of Chametz, we eat Matzot and do everything ‘the correct way’.  However, if we do Pesach in Israel, we used to sneak out of my grandma’s house in Ma’alot and get a pita in the neighbouring Arab village Tarshicha, simply because we felt that in a place where we are surrounded by Jews we can just be who we are and we do not have to do anything special to feel Jewish. In the Netherlands that is different, we want to distinguish ourselves from the regular non-religious Dutch people in order to feel that we are still connected to our roots and identity.

Our Moroccan Jewish heritage is what shapes our rituals and identity as well. My grandparents were born in Morocco and the traditions they taught my dad are what shape our household. We do a mimuna every year after Pesach and when my cousin got married we had the Henna ceremony. I love the fact that our family has taught me about all these different aspects of my identity.

Being Jewish is something I always carried out. I remember, especially during my time in high school, there wasn’t necessary antisemitism, but people were confused about Judaism. How could I do all these weird rituals and then say I do not believe in G’d? And why do I always have to be so difficult, not eating pork when we have class barbeques? What does it even matter? Back then I always got a bit upset, but I did not have the confidence or the tools to express what I was feeling. Usually to connect with my Jewish friends I would go to Haboniem, and I was a teacher at Talmud Tora at LJG in Amsterdam. That is where I used to express my Judaism, and if I went to high school I was just Tamar the Jewish girl, but I did not try to explain or tell people what that exactly means.

This started to change slightly in my last year of high school. I did my final project (profielwerkstuk) on the Jewish identity in the Netherlands and the teacher who was my mentor on this project said I should mention, ‘that I will not discuss the Israeli-Palestinian conflict’. I remember acting surprised, of course, I will not talk about that? I am talking about the Jewish identity in the Netherlands, so why would that even come up? I started to understand that people seriously do not understand what is going on and what Judaism is. I knew I wanted to do something, but I still did not know how, where and with what tools. This year I also decided to take a gap year in Israel, where I participated in a 10-month program where I learned about Judaism and Israel. I volunteered with all different kinds of people there and got to learn about the land. I had intensive trips to Judea/Sameria and east Jerusalem where I got to learn different perspectives about the conflict as well. Furthermore, just living in Israel and hearing first-hand experiences from my friends who lived in Israel their whole lives gave me much more insights and tools than before. When I came back after 4 years in Israel, that is when I started my active activism in the Netherlands.

I started at CIJO initially because I wanted an insight to reconnect with the community in the Netherlands after being gone for four years. After some time now being chair, I came to realize that there are even bigger challenges for Jewish Students than I realized during my time in the Israeli Jewish bubble. Now my goals have shaped to start connecting the Jewish community and students together. When I wanted to organize events I realized how divided the community is, not necessarily opinion wise, but everyone just has their one place and cooperation rarely exists between the different organizations.

However, each organization and each Jewish student have similar experiences and having this communication may really help bridge this gap and help Jewish students out as a collective rather than having individual organizations doing the same thing. Having one organization to go to is always good, but when we are talking about challenges such as combatting antisemitism on university campuses, I think it is good for these organizations to form a united front to help each other out and be there for each other.

I think CIJO is important to the Netherlands since it is not necessarily a Jewish organization and politically it has no affiliation with any party. It is the organization that can really bring all kinds of people together in order to ensure a better, safer future for Jewish students in the Netherlands.

That is what I want, to create a safe space where all kinds of opinions and ideas can be debated and bring people together.

The gap year gave me a lot of confidence and insight into my abilities. During my time in high school, I was not very motivated, and I never received constructive feedback from any of my teachers. Even when I mentioned that I wanted to do a gap year, the teachers basically thought I was throwing away my future and tried to make sure that I decide what university and study I wanted to do before I came back from my gap year.

During my gap year, I got to do different things, learn and discover different skills that apparently I have. I continued to use these skills during my time in the IDF. After just a year of being in my position, my officers announced that I was nominated to obtain an excellence degree from the President of Israel and that I have to go to an interview. I was so in shock and honoured to even be nominated for such a thing, I was never ‘the first of the class’. I obviously never got the degree, only like 20 people from the whole entire army are selected, but the nomination was enough for me. I eventually ended up receiving my excellence degree from the head of Human Resources, the unit I took my course in (I was a social worker for wounded soldiers), which still hangs in my room with pride and is one of the biggest honours I ever received. It made me realize that I should always trust my own judgement and do whatever I feel is right, even if people look weirdly at me. It made me realize that things are possible even when I thought they were impossible.

I study Politics, Psychology, Law and Economics (PPLE) at the UvA, majoring in Political Science. I’ve decided to choose this program after living 4 years in Israel straight after high school. My time there made me realize that there is so much going on in the world that I cannot make sense of. Why do people respond the way they do? Why do governments then respond that way? How come the law does not always protect citizens and why is it so hard to change these laws? When I saw this program it made so much sense to me to study these subjects together. I am now in my second year and I already feel like the concepts and theories that I learn I can almost immediately apply to any current situation.

I’ve decided to major in politics because that is the field where these 4 concepts come together the most, in my opinion. Not only has it shaped my views on what I believe, but it has also made me realize that my personal opinion does not always matter. Politics is all about how you cooperate with one another, how do you make sure there are no tensions, no polarization? Most of these problems are ‘wicked’, there is no one straightforward answer. However, trying to connect the dots and map out all the ideas that are surrounded by this problem helps me make sense of the world and ultimately understand people better.

I hope one day to continue to use these tools either in journalism, government adviser or in any position where I can question the world and help people come together. I do not have my future set out in stone yet or a very specific vision. I trust that the paths that I choose and keep on choosing will eventually lead to my dream job/career.

I just started to get to know Chabad on Campus. I think especially for Jewish students who do not have family in the Netherlands, it is an amazing space to connect with fellow Jews during shabatot and other holidays. I believe it plays an important role in the Dutch Jewish community to connect with each other and also fills a gap that we see with the Young Professionals.

Chabad on Campus is there for them to also have a space to go to, and I think that is a very lovely thing. I hope in the future to continue to work together with Chabad on Campus as well as other organizations to ensure Jewish continuity in the Netherlands.