Isabel in the Spotlight: Chabad From New Jersey to Amsterdam, and Personal Development in the Netherlands #32 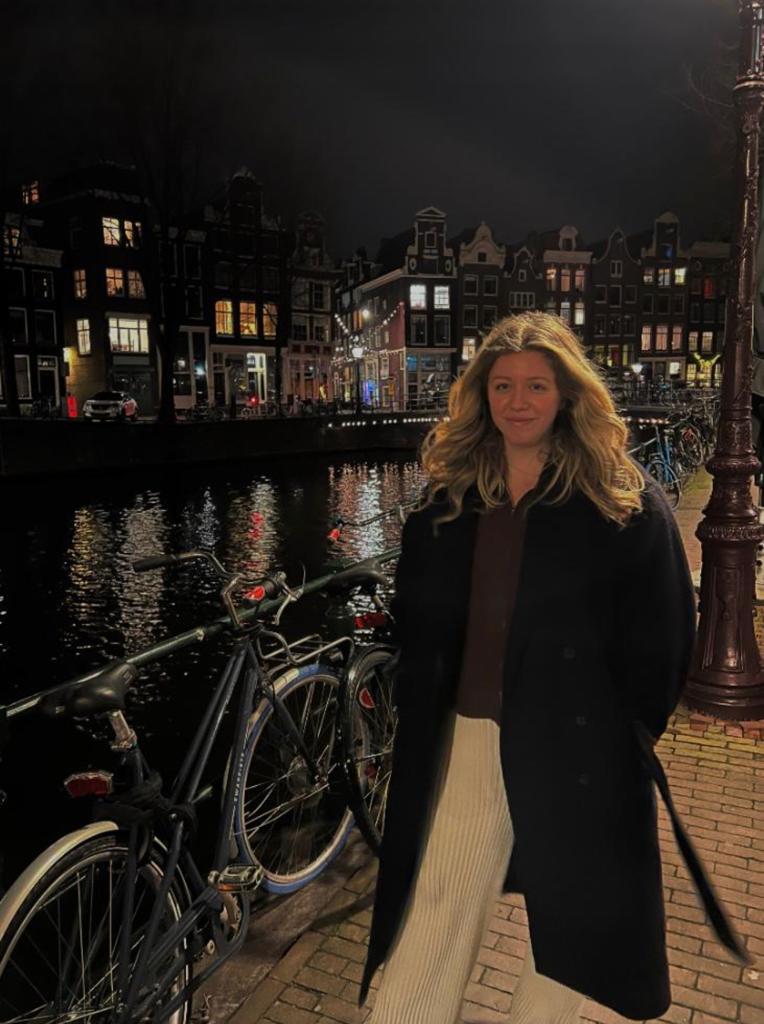 Isabel van der Kroft Glanzberg (25) grew up in New Jersey. After finishing her bachelor’s in advertising in 2019, she moved to Amsterdam to work for VanMoof. In Amsterdam, she finished her Master’s in Communication Science, focusing on entertainment. Currently, Isabel works as a Production Coordinator for 180, an Amsterdam-based advertising agency.

How would you compare your Jewish community in New Jersey to the one here in Amsterdam?

I grew up with Chabad in New Jersey as well, so visiting Yanki and Esty did evoke the same feeling of comfort and familiarity for me. My Chabad at home, however, was not an ‘On Campus’, but more family-orientated. As a result, the dynamics there were much different than here. At Chabad on Campus, there are mostly students and young people, which does make it a lot more fun.

I do have the feeling that I did not really integrate into the Dutch Jewish community here, as I mostly met expats and international students at Chabad. There have been Dutch students as well, but not as many as the internationals, and it would be lovely to meet more local Jews in the future.

You said that you grew up in a Chabad community in New Jersey, what role did Judaism play in your younger years?

I went to a Yeshiva until my bat mitzvah age and we kept strictly kosher at home, so I had a very traditional upbringing. My community was mostly modern Orthodox and everyone kept Shabbos, but we lived a bit further away and had our own way of doing things. However, we did go to shul every Saturday and often times I spent the weekends at a friends’ houses where I would keep Shabbos. In other words, although we lived around an orthodox community, we lived a bit of a different lifestyle, but nonetheless, Judaism played a very significant role in our lives.

When I left my yeshiva for public high school, I kind of lost my involvement with Judaism. Judaism was all I knew from a young age. My whole world revolved around it, and I didn’t really even know what it meant to not live a Jewish life. I slowly adapted, and became comfortable in this new world, which unfortunately meant leaving a bit of my religiousness behind. It’s not a period in life which I regret, because my decline in religious involvement for a few years lead me to understand how deeply rooted it is in my identity and how much I care about it.

When my brother decided to study in the Netherlands while I was still in high school, he got involved with Yanki and Esty at Chabad on Campus. I think this is also a reflection of the impact Judaism had on his identity and how he connected it to feelings of home and comfortability. He was a big reason that I ultimately made the choice to move to Amsterdam.

Next to your brother studying here already, were there other reasons why you chose to come to Amsterdam for an internship?

I studied at a very traditional American university for my Bachelor’s degree, and unlike here, Bachelor’s take four years instead of three years in the United States. I wanted to try something else and get out of my comfort zone. I initially came to the Netherlands to work at VanMoof, but after COVID hit, I decided to try a Master’s program because I loved Amsterdam so much and wanted to continue my journey here.

I am Dutch on my father’s side, and I used to spend all my summers in the Netherlands visiting my family and travelling throughout the country. So my choice for coming to the Netherlands was based on getting in touch with my roots, being close to my Dutch family here, and taking advantage of what seemed like a cool adventure.

I’m very happy with my decision to come to the Netherlands three years ago because I enjoy life in Amsterdam a lot. Living in such a multicultural city gave me the opportunity to meet a lot of new people from a wide variety of backgrounds.

Moving abroad on my own gave me the opportunity to explore my (Jewish) identity on my own, rather than merely because it was only imposed upon me from birth. Meeting new people played an enormous role. Learning about different customs that Jews have around the world and different cultural perspectives has been really fun for me. Although we all have our differences, Judaism is really the common string that can bring a room of strangers together so naturally.

My experiences have led me to realize how important Judaism is to me, more than I had really expected before. It’s comforting to know that I can visit a Chabad house anywhere in the world and find like-minded people who will welcome me with open arms.

Want to learn more about our community? Read our other Spotlights!