Raphael in the Spotlight: The Jewish Mentality, from Antwerp to Rotterdam, and Extracurricular Activities #33 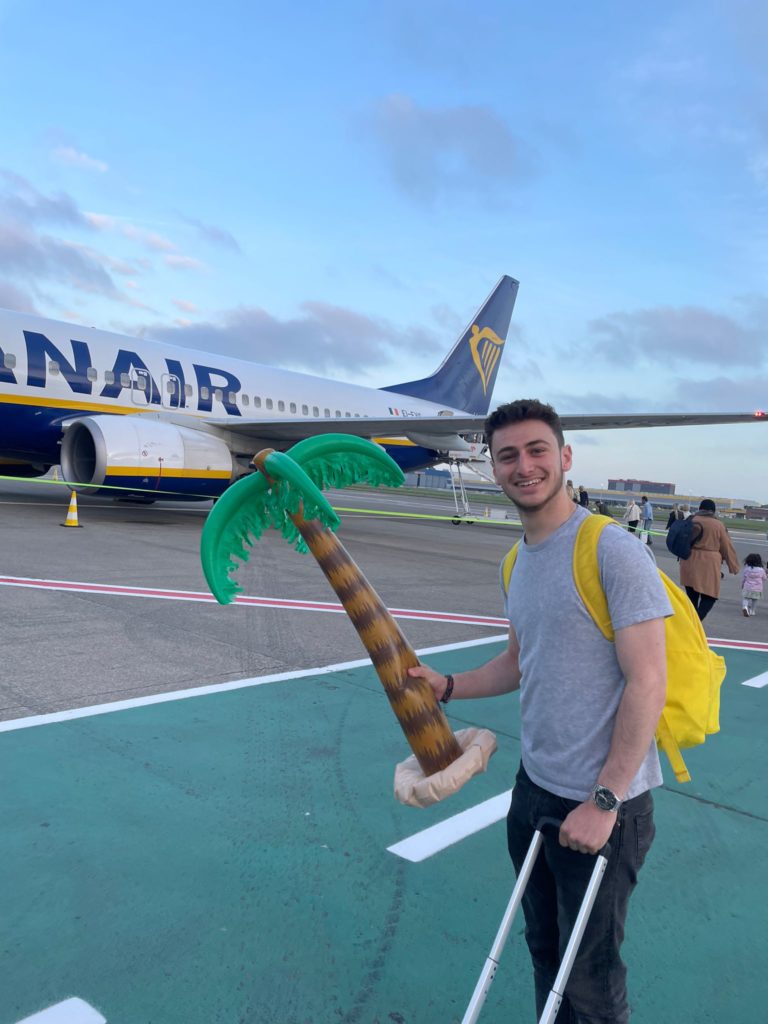 Raphael Fischer (18) was born in Antwerp, Belgium, but moved to the Netherlands to study Medicine at Erasmus University in the summer of 2021. While living and studying in Rotterdam, Raphael is part of the Honours Programme at Erasmus University, regularly visits the local Jewish community and plays music in a band.

How was growing up in Antwerp?

I went to a Jewish school called Tachkemoni in Antwerp where I also learned Hebrew from a young age. Apart from going to a Jewish school, I was also a member of the Jewish youth movement Hanoar Hatzioni, where every Saturday we had fun activities and educational programs with other children, from six to seventeen years old. At the age of seventeen, I became a guide for a group of children aged thirteen to fourteen, and the year after I managed the whole organization (in Antwerp and Brussels) with three other people!

It is fair to say that I grew up in a bubble, attending a Jewish school and spending my weekends with other Jewish children in the youth movement. Living in this bubble did, actually, bother me to a certain extent. I have always been someone who wants to explore new environments and meet different types of people.

However, now that I have ‘left’ the bubble for my studies in Rotterdam, I realize that it also gave me a lot of good things. Although there are people who are close-minded because they live in the bubble, I mostly remember the mindset that other members of my community taught me. In my community in Antwerp, everyone influences everybody to get the best out of themselves and their lives. In some way, I would describe it as a Jewish mentality: do the best you can, whenever and wherever you can!

You’re eighteen years old and in your second year of Medicine, how do you balance between studying and living?

At the moment, studying is going very well for me. I have a lot of free time to meet my friends, for example. I am also doing several extracurricular activities that keep me busy outside of my studies. I am part of the honours program at Erasmus University, for instance. Being part of this program gives me the opportunity to meet amazing people, learn a lot and travel in Europe.

Moreover, I do research on the effect of music in healthcare. We are researching how music can diminish the chances of complications after surgical interventions. Next to medical extracurriculars, I joined a band as a guitarist and plan to travel often this year.

This winter, I would like to do an internship in Israel, at a hospital as well. It maybe sounds like I am doing a lot. In my opinion, however, I am trying to enjoy life as much as possible!

How did you experience the change from your Jewish environment in Antwerp to the diverse city of Rotterdam?

Moving to Rotterdam, thus leaving my Jewish bubble in Antwerp, was very difficult for me, because I miss having a big Jewish community around me. There is a Chabad in Rotterdam, but it is very small. However, we as local students try to organize things on our own. Last Friday, for example, we organized a small Shabbat dinner for approximately seven people.

I also feel as if there is a difference in mentality between the Dutch people who I have met during my studies and my community back in Antwerp. The impression I sometimes get from the Dutch is that they often have a mentality of living to work, whereas I think that working to live is the way to go.

Furthermore, I had some bad experiences while living in Rotterdam, connected to leaving the Jewish bubble of Antwerp. Two weeks ago, three men came to me on the street and ripped my Chai necklace off my neck. Even though I am unsure if there was an antisemitic motive behind it, the feeling I got from it was all but pleasant. However, they caught the men and one of them is actually getting prosecuted for it.

I also once spoke to someone who told me that it would be better for me if I did not tell anyone that I am Jewish, as people would not like it. Another person who I met, who seemed to be very open-minded and who was quite a religious Muslim, told me that he did not like Jews when he was younger. Although he said that it was out of ignorance, and not knowing what and who Jews are, it was very confronting because I realised that for some people it does not matter who you are, if you tell them that you are Jewish, they will not accept you.

These bad experiences made me feel like I was not at home in Rotterdam, also because I met many Jews who had similar experiences here. However, I realized that not everybody thinks and acts like those people, this behaviour should therefore not be generalized. Many of my friends from my studies, for instance, were shocked when I told them about these experiences, and they respect me for who I am.

Although it is not fun to be “the Jew” somewhere, I should not take these antisemitic incidents too personally. There are many people who accept me for who I am, and I should relativize these bad experiences. Focus on the good people and experiences that life has to offer!

Would you like to read more about our Chabad on Campus community? Check out our other Spotlights!