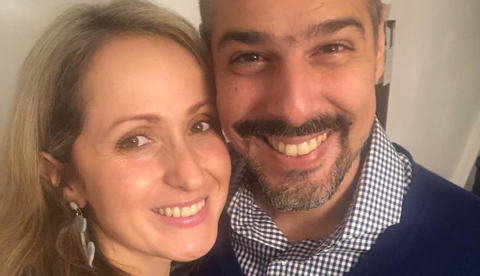 ​​Daniel and Liza decided to go on an adventure 7 years ago when they moved to Amsterdam together as a beautiful couple.

Liza went to Israel to visit her friends and family while already working in Amsterdam for an IT company as a Sales Region Director. Meanwhile, Daniel lived in Israel almost for a year. It was thanks to JewSwipe that they met and had a romantic date in Tel Aviv. The decision to live together in Amsterdam was appealing because they both had a passion for HighTech and a similar work-life balance.

The feeling of freedom and security compared to their home country was a major force that drew them to the Netherlands. Despite this, the unstable weather conditions and the high taxes were less appealing. To every disadvantage, there is a corresponding advantage.

Liza was born in the capital of the then Soviet Union, Moscow. Despite the financial difficulties at the time, she was lucky enough to have a loving home and many joyful moments with her family. Her parents could not follow Judaism, and due to the political regime, shared minimal knowledge about it. Yet secretly many Jewish stories and cultural heritage have been preserved. Amongst these were delicious recipes and sweets from the Jewish kitchen.

Liza’s father always dreamed that he would do his best to integrate them into the Jewish community if he had children. After the collapse of the Soviet Union in 1991, Liza, therefore, became an active participant in the Moscow Jewish community. Once she moved to the Netherlands, the local Rabbi of Moscow introduced her to Yanki and Esty.

Daniel was born in Rio de Janeiro, Brazil. He studied in an Orthodox Jewish school (Barilan) and celebrated most of the Jewish holidays. His childhood was filled with music and sports, especially tennis, a passion that he practices to this day. Regardless of the heat in Rio de Janeiro, safety is not guaranteed and that is why he moved to Israel, where he had the pleasure of meeting Liza.

Daniel has been well acclimatised to Amsterdam since he set up his own startup. He has been working as an entrepreneur for over 20 years with interactive multimedia solutions such as the recently famous VR and Metaverse. Spotlight. Amsterdam. Jewish. International. community. he

“ We sincerely believe that identity includes traditions, and one of the beautiful legacies we have is the joy of dance and music. For example, Daniel has contributed to creating soundtracks for Jewish dance groups such as Miami Jewish Community Center (JCC) and Kinneret in Rio de Janeiro for more than 15 years. Spotlight – Amsterdam – Jewish – Internatio

We do not consider ourselves religious people, although we do believe that it is extremely important to keep the Jewish identity alive and also to pass it on to our future children.

We do love to keep the traditions and keep Shabbatot with the delicious Challot freshly made by Esty. When we came to the Netherlands as expats Chabad On Campus welcomed us into the Jewish Community.

Chabad On Campus is primarily about people. We truly admire Yanki and Esty for bringing together young professionals and students to connect with our roots and religious aspects of Jewish life. ”