In the Spotlight #8 – Fanni 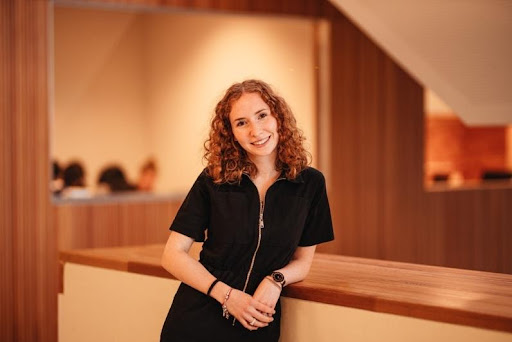 I grew up in the Jewish bubble of Budapest, Hungary. I went to Lauder Javne School, which is a private Jewish elementary and high school in Budapest. There I participated in many committees and school-related activities.

From that year on, I have decided to go back every year. At the age of 16 years old, I was chosen for an international leadership training. I got the opportunity to travel to Israel and USA to learn about their local Jewish communities and share ideas on how the Jewish communities around the world could improve. That experience was unforgettable. After that, I also did the Madrich training for the JDC Szarvas Camp. I also participated in a Jewish youth organization, Hanoar Hatzioni, where I went every Saturday evening.

Furthermore, I finished the Madrich training at Hanoar and was a Madricha for some time. I would say that generally, the Jewish community in Hungary is relatively small, most people know each other, or you know someone who knows the other person. Hence, the word passes quickly, and everyone knows about it if something happens.

I have lost my father at a young age, so my mom raised me by herself. I had a really happy childhood; I am lucky to say that I have a really strong bond with my family. I see my grandparents, uncles, aunts, and cousins weekly from my mother’s side as they also live in Budapest. We always had family lunches every Saturday or Sunday for as long as I remember.

We spend almost four weeks together at lake Balaton during the summer, where we have a weekend house. As my cousins and I became older, unfortunately, the four weeks became shorter, but we always found the time to go there together for at least two weeks.

What I love about Balaton the most is that we share a twin house with my grandmother’s sister, so it is not only us, but her children and grandchildren are also coming, so it is a big family get together every year.

Judaism is really important to my family. We celebrate all the major holidays together. We always go to the same synagogue, where my great grandparents went. They are still there with us, as we are sitting exactly at the same seat as they used to. We celebrated all the important occasions in this synagogue, from my parents’ wedding to all the Bat and Bar Mitzvahs.

I would not say that we are religious as we do not keep kosher (we just do not eat pork), and we do not keep Shabbat, but we are traditionalists. Keeping family traditions is the most important for my family, including eating the same Hungarian Jewish dishes on holidays, going to the same synagogue, doing shnoder on Yom Kippur (Tzedakah), and passing on Jewish sacred objects to the younger generations, including siddurs, menorahs, and tfilins.

For example, there is a tradition that grandmothers pass on their Mirjam’s to their granddaughter. The tradition started when my great-great-grandmother received her Mirjam in 1912 from her grandmother on her Bat Mitzvah. Now my grandmother uses it, and she will pass it to me.

The other side of my family is more religious, I would say. My grandparents live in Debrecen, which is more than 2,5 hours away from Budapest, so, unfortunately, I see them less often. They keep kosher as they can, which is not so easy in the countryside of Hungary, as the closest kosher store is in Budapest.

So doing daily groceries in the kosher store would be impossible for them. They have two sinks, fridges, and different plates for meat, dairy, and parve; however, the groceries are from local stores. My grandfather is almost 83 years old, but he still goes to the synagogue at least three times a week. Unfortunately, in the countryside, synagogues often can not even gather ten men to do the Minjan, which is unfortunate.

For me, my Jewish identity is super important. I can not imagine raising my future children otherwise. I hope to keep the traditions going and pass all the knowledge to my children. Jewish identity for me is not only preserving Judaism by keeping the holidays but also remembering Jewish history and keeping the values that my family passed on to me, including the importance of family and education.

I study at the Amsterdam University College, an honors Liberal Arts College where I study social sciences focusing on law. This is my last year in Amsterdam, and next year I will continue my studies in London at the London School of Economics, where I will be studying Media and Communications. I am interested both in media, law, and communications. In the future, I want to work in the field of media law where I can combine my different interests. My interest arose from the internship that I did in the summer. I was an intern at RTL KLUB (M-RTL Zrt.), one of Hungary’s leading free-to-air television channels that is part of the international RTL Group. As an Intern, I had the opportunity to get familiar with how a media company works.

After graduating from High School and getting further from the Hungarian Jewish bubble, I felt that I was really missing the Jewish Community. However, the feeling disappeared quickly as one of my friends, whom I met when I was about eight years old at a Jewish School event and went to the JDC Szarvas Camp together.

She moved to Amsterdam at the same time as I did, and she told me that she met Yanki and there is a Chabad on Campus here in Amsterdam, and we should go for a Shabbat. So we went, and since then, the Chabad on Campus, especially Yanki and Esty, became really important to me.

I found it hard to find new friends at University, and the Shabbats helped me with that. I can say that I have formed friendships that will last for many, many years, if not forever, thanks to the Chabad. I really like to go to Shabbat dinners, talk to new people, and listen to their stories.

Monday night family-style dinners are my favorite, as the name of the event really reflects on what it actually is. There is no better program for a rainy Monday night than eating Esty’s food and having a cozy dinner with just a few people.