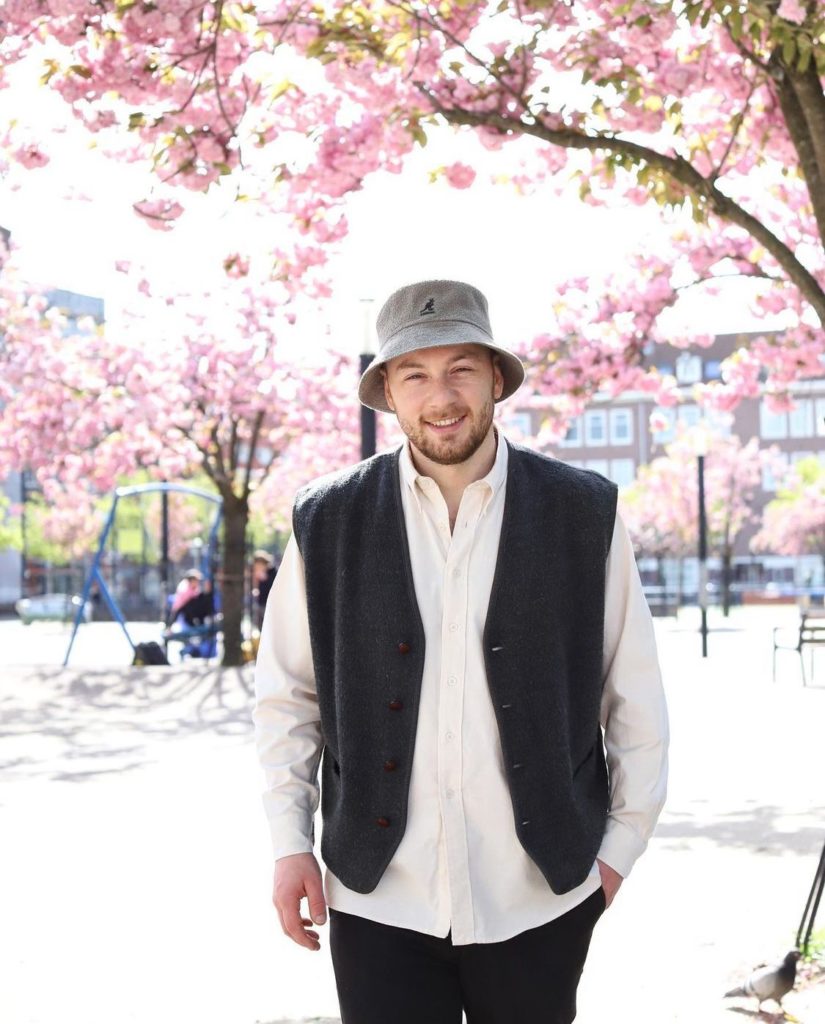 Benny Heertje (30) grew up in the Netherlands in both Amstelveen and a small village near Breda until he moved to Amsterdam for his studies, which is where he lives currently. He studied Interdisciplinary Social Sciences and Sociology in Amsterdam and is now working at the Municipality of Amsterdam and is a tour guide for the Jewish Cultural Quarter.

How was your childhood impacted growing up surrounded by many siblings?

Growing up I was surrounded by hectic chaos, I come from a family of five kids which includes myself and my twin sister. Although my family was big, growing up with a twin is a unique experience that’s fun because you always have someone your age to talk to, or someone to compete with. My relationship with my twin sister is special because I feel like we understand each other as we sort of have an automatic connection which allows us to communicate with very little words. We have very different and strong characters in my family, which is clear when were all together at a terrace for example. When we order drinks, it illustrates our differing personalities which can be seen through the huge variety of beverages that appear. Although it can be frustrating sometimes, I think its ultimately special to have this band of characters I call my brothers and sisters.

You spoke about the move from Amstelveen to a village near Breda how was the big move from a large city to a small village?

When I was 11 we moved from Amstelveen, a relatively large bustling city to a small farmers village near Breda which was relatively off the grid. They felt like two different worlds and although I only moved an hour away, for the Netherlands that’s quite far. In Amstelveen there was rich cultural life as well as Jewish history, I went to Jewish school, and I was surrounded by many Jewish people which is something I later came to appreciate or miss. In Breda there was not a very big Jewish community when compared to my childhood in Amstelveen. In Breda the community was Orthodox and in Amstelveen it was Liberal so I felt the difference in religiosity very clearly. Looking back it felt quite isolating to be Jewish in Breda, my twin sister and I would experience some Antisemitism from our classmates so it was hard as a young boy to be open about my religion. Especially because you develop identifying with your religion at that age it can be conflicting when you’re not completely accepted for it.

Moving to Amsterdam for your study must have been a big change, how was your experience living in a Jewish Student house in Amsterdam?

Living at a Jewish Student House in De Pijp was an awesome experience, I was scared that I needed to adhere strictly with many rules I didn’t practice growing up but this wasn’t the case. There was an adjustment period where I learnt about the Kosher side of the kitchen and certain cleaning practices, but it was very interesting. There was mutual respect in the house regardless of your level of “Jewish-ness” and it was a lot of fun, we had a large space for 7 people and another Jewish Student house next door so it was 16 of us all together. My favorite memory was having a snowball fight/capture the flag fusion game in 2014 where one house played against the other to protect the flag. Most importantly the student house was also where I met my girlfriend of 9 years. There were all kinds of events in Amsterdam, dinners every week and celebration of Jewish holidays in the community. I went to Chabad on Campus because I learnt about it through one of my roommates, and it had just begun at that time, and I was enticed by the prospect of a free meal on Friday. It was delicious and I remember in the beginning was very crowded and there was a lot of singing. Some weeks even 10 people from my student house came along. I felt lonely being a Jew near Breda but when I moved De Pijp and was surrounded by Jewish Students and it felt a lot like home.

Did you have time to travel during your childhood and young adult years?

My girlfriend is a photographer, so we spent time all around the world for her work as she had assignments in different countries, from Southeast Asia to Eastern Europe. One of her projects was photographing children with their dreams in collaboration with UN Refugee Agency (UNHCR) and Humans of Amsterdam. I’m also half American on my mother’s side so I lived in the United States for a few months when I was 19 and the Jewish Delis were definitely a highlight. I also travelled there with my family during my youth as I had relatives all around the US.

How is your experience working at the Municipality in Amsterdam?

People seem to have this preconceived idea that those who work in government positions can be boring or lazy, but I believe we work quite hard! At the municipality my work consists of many factors, currently I’m working on a project in the Arts and Culture sphere, a National Slavery Museum that is set to open soon in Amsterdam as well as an audio-visual studio for the municipality. In the past we’ve worked on organizing community conversations about vulnerable groups such as the homeless who are more prone to drug use and how to help as well as integrate them into the community. I’m also a tour guide for the Jewish Quarter in Amsterdam and give tours mainly to school children about this area.